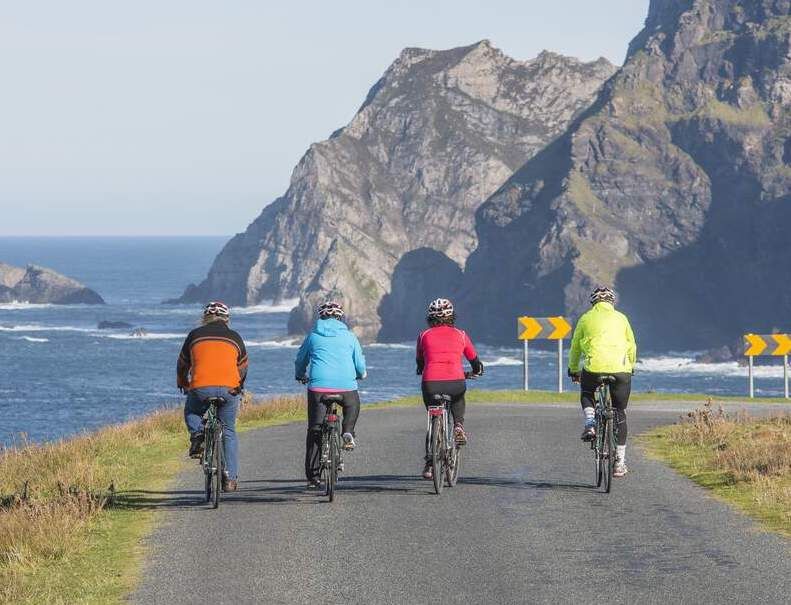 Explore the coast of the Atlantic Ocean in Glencolmcille, Donegal

Unlike many of the boundless territories of western Donegal, Glencolmcille is a distinct place, a place with clear and knowable boundaries, locked by the Atlantic to the west and a wall of peat-covered mountains to the north, to the east and south. It is perhaps this aspect of the valley that has attracted man since the earliest times: it has been inhabited for at least 6,000 years.

Originally published in Ireland from Welcomes Magazine, in the July / August 2017 issue. Subscribe now to our sister publication which is printed six times a year

A rich collection of monuments from the Neolithic period to the Iron Age and from the early Christian period to the time of the Napoleonic wars can be found in the landscape, preserved by the remoteness of the place, the poverty of the people in recent centuries , and religious devotion.

The land along the west coast of Donegal is of inferior quality, and the survival of the population and culture seems to be due mainly to fishing and the long-established economic ties with Scotland, where seasonal labor has for a long time increased meager incomes. In the late 1940s, however, emigration from places like Glencolmcille began to become more than seasonal and threatened to destroy the already impoverished community.

In 1951, however, things started to change in the Vale when the new parish priest, Father James McDyer, arrived on his bicycle. McDyer (1910-87) had worked as a curate with the Irish in Southwark, where he experienced all the horror of the Blitz. After the war, before coming to the valley, he was parish priest of Tory Island, where American author Dorothy Harrison Therman, in her book Stories from Tory Island, described him as a man who seemed to possess exceptional powers.

He was shocked at what he found in Glencolmcille: in his own words, he was “as mad as hell” that people were subjected to such neglect: there was no electricity, no running water, and no support for industry or economic structure in the area.

â€œI’m an activist by nature,â€ he said later, â€œand I thought it was not good to preach justice and equality on a Sunday if you can’t work. to make it happen on Monday â€. Less than a month after his arrival, he had formed a parish council, in which fifty-fifty men and women were represented. His first task was to build a community hall, which he saw as an essential starting point for bringing people together. The urgency he brought to the project is evidenced by the fact that the hall was completed in ten weeks by an enthusiastic local workforce with mostly donated materials.

Father McDyer was instrumental in providing electricity and water and made valiant attempts to establish a communal farm. He is interested in the notion of “Christian communism with a little capitalism” and sees himself “walking on the path of radical socialism”. His revolutionary message, however, was viewed by government officials as too radical, and he was thought to be experimenting with communism.

He was successful in developing tourism and setting up small community industries, such as weaving and knitting, but his main achievement was the transformation of the Glen through radically improved living conditions and the solid establishment of the community on the road to self-fulfillment.

Although there is no documentary evidence, local tradition suggests that St Colmcille lived for some time in the valley. For many centuries, a turas, or pilgrimage route dedicated to Colmcille, touching fifteen old stations, has circled the valley. The stations are old stone slabs with incised crosses, stone cairns or, in one case, the remains of a building known as the St Colmcille chapel. Between each station, pilgrims recite prescribed prayers and circle each station a prescribed number of times. One of the cross slabs has a hole in it, and it is said that sinless pilgrims can look through the hole and see the kingdom of heaven. The annual St Colmcille turas take place on June 9, but until the 1950s locals walked it every Sunday. Our host, MÃ¡iread, told me that it’s mostly visitors who want to do it today. 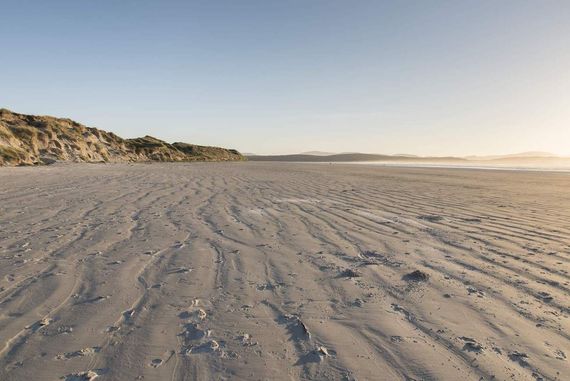 We set off on the turas one evening, starting just outside the wall of the Church of Ireland, which is picturesquely located in the middle of the valley. Perhaps the powers that be somehow felt that we had not given up on “the world, the flesh and the devil”, nor said the required fifteen decades of the Rosary, and we did not only made it to station three when a rising tide quickly and almost magically flooded the road in front of us and we had to give up. It was probably just as good because we were told later that at high tide you might have to wade 1.2 miles of swamp between stations eight and nine.

Glencolmcille is a region of the Gaeltacht, that is, a region recognized by the government where Gaelic is the everyday language. There are Gaeltachts in Mayo, Galway, Kerry, Cork, Meath and Waterford, and around 100,000 people live there. A state agency called ÃšdarÃ¡s na Gaeltachta promotes and administers the development of the Gaeltacht regions and can provide employment grants, capital grants, rent subsidies, interest subsidies, and training grants to help new and established businesses. The Gaeltacht in Glencolmcille offers Gaelic courses for adults and the summer courses had just ended the week before our arrival. Besides learning the language, adult students can also take archeology or tin flute and whistle lessons, and I’ve been told that craic is great! Besides hearing Mairead speak Gaelic on the phone, we only heard English spoken in the pub and in the shops. After abandoning the turas, we headed to one of the stations not affected by the flooding. I approached a chatty trio of local farmers to ask permission to cross a field and opened politely saying â€œgabh mo leithscÃ©alâ€ or â€œexcuse meâ€. The three of them laughed together, and one of them asked me in English if I was attending any of the Irish lessons. I said no, but that I was following the turas. They said there was no problem crossing the field, and Teresa and I continued on our way, still leaving the men laughing. When I told this to Mairead, she smiled.

“The term ‘gabh mo leithscÃ©al’ is not commonly used in Donegal,” she said. â€œIt’s more of an east coast thing. The locals, however, hear it so much from the students who come here that they have called them the “gabhmoleithscÃ©als!”

There are ten major megalithic tombs within and in the immediate vicinity of Glencolmcille, an unusual density of such monuments, and they include, in the town of Farranmacbride, the largest court tomb in Ireland. Court graves are Neolithic tombs built from large slabs of stone and arranged in a circular or oval fashion

‘entrance’ courtyard surrounded by a stone wall. We wandered down a narrow, winding road lined with fuchsia, heather, and glowing montbretia garlands to find Farranmacbride’s grave. A small wooden gate led us to a path that spanned a jingling stream, and we crossed a field to reach the fenced monument, scattering rabbits with their white tails dancing. The tomb looked like something as old as the earth itself had grown through the grass and bog, seeking light. Although it lost many of its small stones over the years due to the field walls, it was very large and must have taken a lot to build it. The enclosure was overgrown with grass and wildflowers camouflaging holes between the stones that twisted my ankles, and it took me a while to figure out the layout. The tomb itself was covered with large roof slabs painted profusely with map lichen, but gaps gave a glimpse of the dark, box-like interior. I tried to evoke what it looked like when it was built and imagine our ancestors meeting in the courtyard for a funeral ceremony. The construction was proof that five or six millennia ago Glencolmcille was a very different place, a vast mountain oasis of lush fertile fields, full of crops and livestock, ensuring a large healthy population.

Our helpful host, Mairead, arranged for me to visit another monument, an underground passage, within the church grounds. Undergrounds are underground chambers built for refuge or food storage, dating from the Iron Age, normally found along the Atlantic fringe of Europe in places like western France , Cornwall and Ireland. Some are quite complex, with side galleries, chambers, tiered floors, and concealed exits. The Irish undergrounds seem to date from the early Christian period and are often associated with settlements such as the farms of the ring fort; it seems likely that they were used as hiding places to conceal people and property during times of violence. Paddy Beg Gillespie, the keeper of the keys to this cave, came to open it for us. A round, smiling man, he was a local celebrity, having appeared, showing the underground, in a number of TV shows.

He opened a wooden trapdoor revealing a circular “manhole” bordered by stone. A rather rickety ladder descended into the darkness. Paddy didn’t come down the ladder with me because of his arthritis; he stayed to discuss with Teresa the fact that he had been waiting three years for surgery. With painful arthritis, I don’t know how the man was so cheerful, but he was, and he made sure I knew all the facts about the underground, especially that he had been carbon dated from the 8th century.

The floor was about three meters below ground level, and I enjoyed the experience of standing in the dark entrance chamber for a little while, letting the vibe of this weird place trickle over me before turning on the light. my torch. The walls were of dry stone, supporting a roof of large slabs of stone, and the floor was earth. There was at least a cupboard-shaped niche in one of the walls. Off the entrance chamber, in which there was barely standing, I could see that there were two passages, one quite wide, and the other narrow. They seemed to extend a good five meters in both directions. I did not climb there; it was enough to see the extent of this remarkable construction and realize that it was the oldest unmodified, unrestored and complete man-made structure I had ever been in. While Paddy Beg chatted with Teresa upstairs, I had one foot in “the other world” and spent a little time taking the imagination back fourteen hundred years.

* “Europe’s Atlantic Fringe: Exploring the west coasts of Portugal, Spain, and Ireland” by Michael Fewer is published by Ashfield Press and is available at www.books.ie.

Originally published in Ireland from Welcomes Magazine, in the July / August 2017 issue. Subscribe now to our sister publication which is printed six times a year