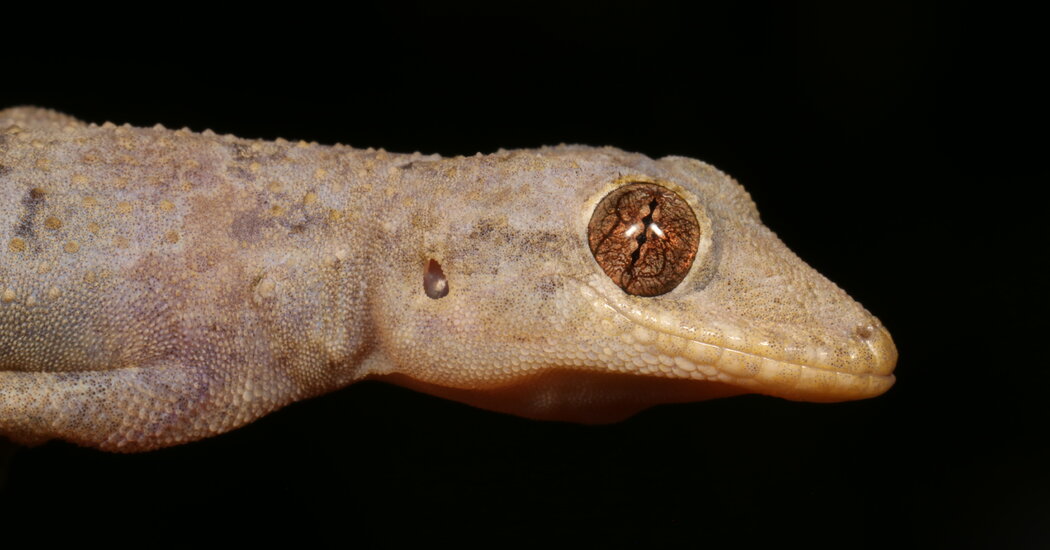 How an African gecko crossed the Atlantic Ocean

If you see a gecko crawling up the side of a house in Florida or somewhere in Central or South America closer to the equator, chances are it’s an African house gecko, Hemidactylus mabouia.

Small and brown, the African house gecko is now widespread in the Western Hemisphere. But the gecko is native to southeastern Africa, Zimbabwe, Mozambique and neighboring regions. So how did he cross an ocean and come here?

In a paper published Wednesday in the Royal Society Open Science, researchers pieced together the evolutionary history of H. mabouia, revealing it to be a diverse collection of closely related species that include up to 20 lineages at across Africa. They show that a single lineage – Hemidactylus mabouia sensu stricto – was able to spread successfully throughout central and western Africa as well as in the Americas.

The paper also offers a new way to test an old hypothesis – that African house geckos stowed away on ships involved in the transatlantic slave trade. The slave trade is also thought to have transported the Aedes aegypti mosquito and several species of earthworms to the Americas from the African continent, and the new research further reveals its ecological effects in addition to its human toll.

Although African house geckos are much larger than a mosquito or earthworm, geckos are excellent stowaways. The tiny lizards live in crevices and can survive for quite some time without food, according to Ishan Agarwal, herpetologist and author of the new paper. A single stowaway gecko with a belly full of eggs would be enough to start a new population of geckos in a new country, without attracting too much attention.

“People have never really looked at them,” said Aaron Bauer, herpetologist at Villanova University and co-author of the paper. Many herpetologists, he said, regard geckos as a “trash” species, that is, a weed and uninteresting.

Dr. Bauer first thought of piecing together the evolutionary history of the African house gecko about a decade ago. Dr. Bauer was also familiar with two papers from the 1960s that noted the potential link between the gecko and the transatlantic slave trade. At the time, researchers lacked the technology to test the theory; but in the 2010s, Dr. Bauer could do it.

Margarita Metallinou, a postdoctoral researcher working with Dr. Bauer, helped conceptualize the project and began sequencing some specimens. But then tragedy struck: in 2015, Dr Metallinou died in an accident in Zambia while conducting research, which set the project back.

Dr. Metallinou’s colleagues continued the research by collecting tissue samples from museum specimens of African house geckos around the world. Their final dataset included specimens from 186 geckos. Dr. Agarwal assumed the responsibilities of Dr. Metallinou and did most of the sequencing work.

The researchers were surprised at the high diversity of the 20 interrelated species of H. mabouia, Dr Agarwal said.

Yet, despite all this diversity, only one species, H. mabouia sensu stricto, managed to colonize the Americas. All other H. mabouia geckos have restricted ranges. This raises the question of whether sensu stricto has “special traits that contribute to invasiveness, or whether it was just a matter of opportunity,” said Sarah Rocha, a postdoctoral researcher at the University of Vigo in Spain which did not participate in the study.

The authors have a few theories. Unlike forest geckos, H. mabouia sensu stricto in African countries is most commonly found in open spaces, including clearings and human villages. Although sensu stricto faces competition from many other gecko species in Africa, it may have spread more easily in the Americas, which has fewer native geckos.

To test the transatlantic slave trade theory, researchers studied the routes of slave voyages and cross-referenced historical sightings of geckos in the Americas with areas involved in the slave trade. H. mabouia was recorded in the West Indies in 1643 and in Dutch-controlled Brazil around the same time, more than a century after slave ships crossed to the Americas.

The genetic results in the paper also support this theory, as geckos collected from the Americas and Africa had low genetic diversity, suggesting that geckos spread to the Americas fairly recently.

The authors warn that their genetic analysis does not rule out that the reptiles crossed the Atlantic a thousand years ago in another way.

But there is rarely an “irrefutable” piece of evidence, such as a mention of a gecko in a logbook, in this kind of research, said Christian Kull, a geographer at the University of Lausanne in Switzerland who has studied the plants transported by enslaved Africans. He was not involved in the research, but said a gecko hiding on ships seems more plausible than a gecko “floating on a water hyacinth raft flooded from the Congo River across the Atlantic”.

The African house gecko is a commensal species, meaning it benefits from being close to humans. It lives around our buildings and hunts using artificial lighting – a beacon for insects. As a result, it wouldn’t be surprising to see a gecko aboard a ship, Dr Kull said.

According to Dr. Kull, it’s not necessarily the gecko’s fault that it has become so adept at surviving around the world. Commensal species like geckos, rats and cockroaches can best be understood as passengers rather than invaders. “Maybe it’s humans who are the invasive species,” he added.

2021-08-03
Previous Post: Two-story house collapses in Argentina’s South Atlantic Ocean due to coastal erosion
Next Post: The Atlantic Ocean is waking up. 65% chance for an above normal hurricane season :: WRAL.com