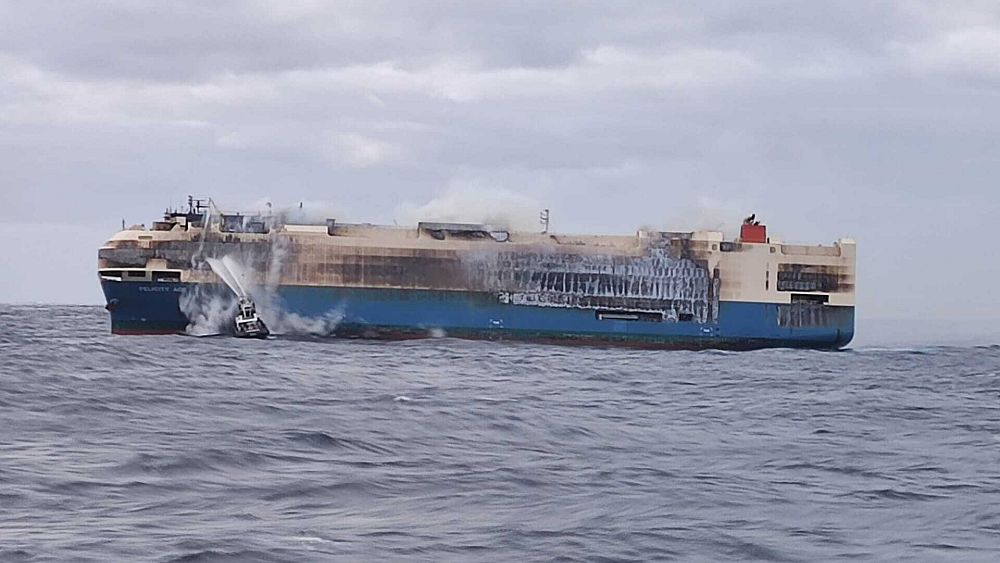 A large freighter carrying cars sank in the Atlantic Ocean, thirteen days after a fire broke out on board.

The ship’s director and the Portuguese Navy confirmed on Tuesday that the Felicity Ace sank about 400 kilometers off the Azores.

The Panamanian-flagged vessel was being towed after a rescue team extinguished the fire, MOL Ship Management in Singapore said in a statement.

The 200-meter-long ship was sailing from Germany to the United States before it caught fire last month. The Portuguese Air Force had evacuated the 22 crew members, before leaving the ship to drift for several days in the middle of the Atlantic.

Ocean tugs equipped with firefighting equipment had hosed down the ship’s hull to cool it.

The number of luxury cars on board was unclear, but ships the size of the Felicity Ace can carry at least 4,000 vehicles.

The ship was carrying both electric and non-electric vehicles, according to Portuguese authorities.

Authorities suspect the fire may have started due to lithium batteries used in electric vehicles, but an investigation into the cause of the fire is still ongoing.

The Portuguese Navy has confirmed the sinking of the Felicity Ace, saying it happened outside Portuguese waters.

There were also fears that the sunken ship could pollute the ocean, given that it was carrying 2,000 tonnes of fuel and oil.

The Portuguese Navy said in a statement that only a few pieces of wreckage and a small oil stain were visible where the ship sank. Tugboats were breaking up the patch with pipes, he added.

A Portuguese Air Force plane and a Portuguese Navy ship will remain on site to watch for signs of pollution.