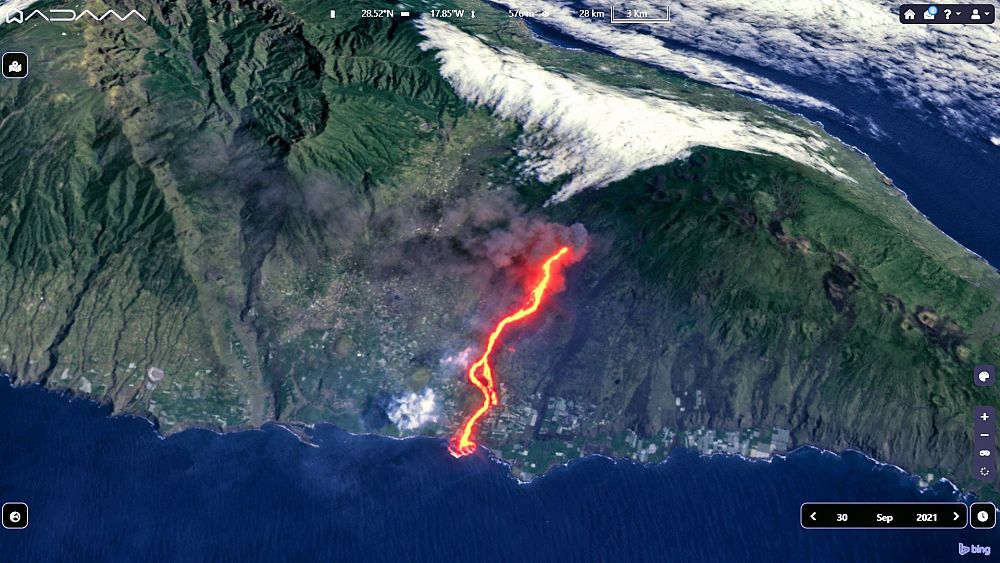 The volcano of La Palma, in the Canary Islands, opened a new crack on Friday, triggering a series of small earthquakes.

Authorities said they recorded eight new earthquakes with a magnitude of up to 3.5.

They were waiting to see if the lava from the new fissure would join the main flow, which traveled six kilometers and reached the Atlantic Ocean, shown in the satellite image above.

The molten rocks solidified on contact with seawater, creating a kind of peninsula.

Thursday afternoon, the area of â€‹â€‹this extension approached 19 hectares, against 10 in the early morning, said David Calvo, spokesperson for the Volcanological Institute of the Canary Islands (Involcan).

Experts have warned that it is likely to have a devastating short-term impact on the local marine ecosystem.

Authorities were monitoring air quality along the coastline and although sulfur dioxide levels in the region have increased, they do not pose a threat to health, the government of La Palma has said.

However, he advised local residents to stay indoors. He also recommended that residents of the island wear face masks and goggles against the heavy fall of volcanic ash.

No injuries or deaths have been reported since the September 19 eruption.

Lava has so far affected more than 1,000 buildings, including homes and farm infrastructure, and buried approximately 338 hectares (835 acres).

La Palma, home to around 85,000 people who make a living mainly from fruit growing and tourism, is part of the volcanic Canary Islands, an archipelago off northwestern Africa that is part of Spanish territory.

The island is approximately 35 kilometers (22 miles) long and 20 kilometers (12 miles) wide at its widest point. Life has continued as usual over most of the island while the volcano is active.

The two previous eruptions of La Palma took place in 1949 and 1971. They caused a total of three deaths, two of which were caused by gas inhalation.