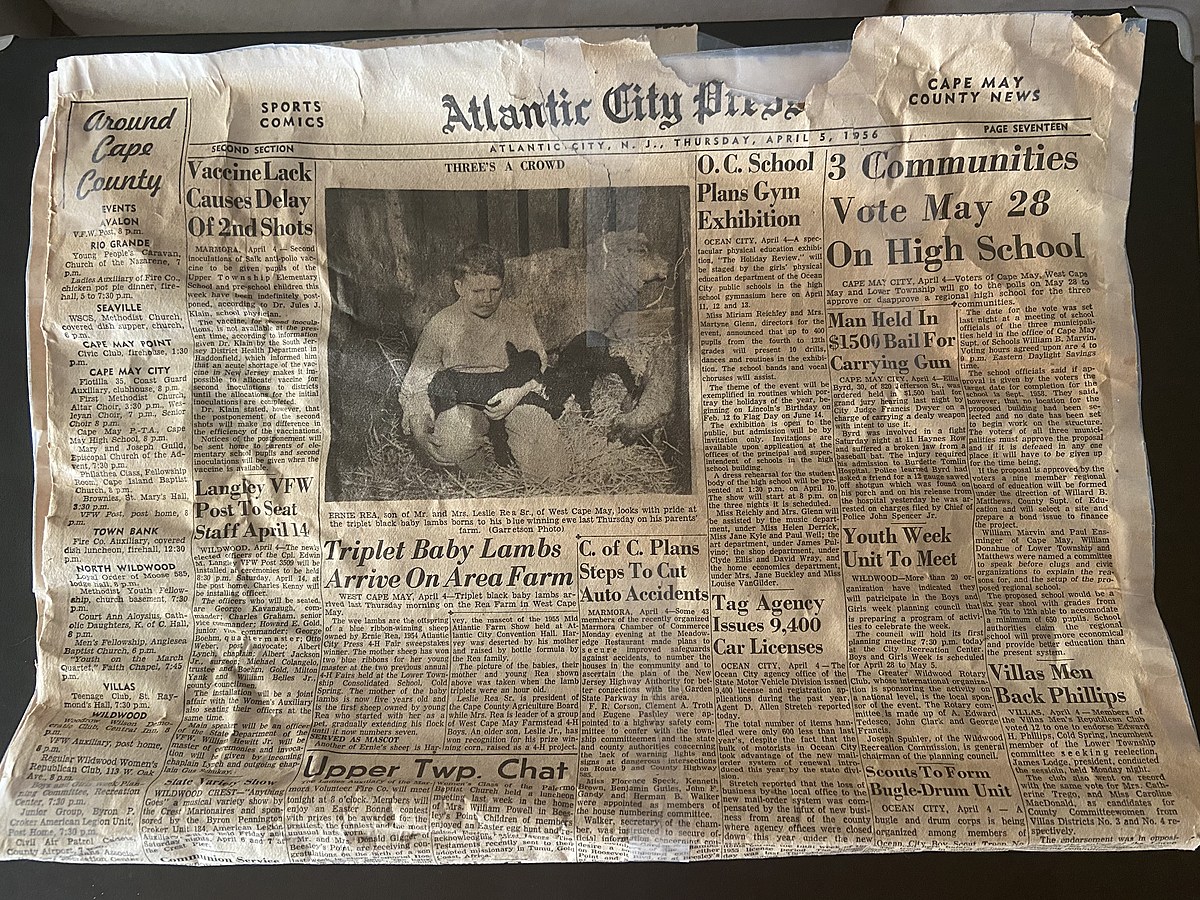 Let’s crack this open together, a 1956 Atlantic City time capsule

Join us, as together we open a time capsule from 66 years ago. The Atlantic City Press of April 5, 1956, to be exact.

It was a time when people got most of their news and information from everyday life.

The story begins with a very good friend of mine, Michael Heath. Mike is a retired career police officer from Atlantic City, who also has great talent as a builder, finish carpenter, and more.

Mike was working on a house in Cape May County, New Jersey. After doing the demolition, he found an Atlantic City newspaper from April 5, 1956.

He called me shortly after his find and I couldn’t wait to get together to collaborate on this story. We’ll hear directly from Mike at the end of this story.

First, I was struck by this banner, title at the top of the page, titled:

The more things change, the more they stay the same.

By early April 1956, they were experiencing delays of a potentially life-saving polio vaccine. We also experienced vaccine shortages during our two-year COVID-19 pandemic.

There were also dramatic differences between 1956 and 2022. In 1956, Americans trusted their government and eagerly wanted the new polio vaccine. Dr. Jonas Salk announced on a radio broadcast on March 26, 1953 that he had developed a cure for polio.

Dr. Salk was a national hero, celebrated wherever he went.

By comparison, our government today and the face of our pandemic, Dr. Anthony Faucci, is generally not trusted by many Americans, which is a very sad commentary.

On April 4, 1956, a decision was announced that Philadelphia’s own princess could remain an American citizen.

The article details all sorts of technical issues about how she could hold dual US citizenship and be a princess and a citizen of Monaco.

Then it was an ad for The Knife and Fork that caught my eye.

Yes, Boneless Shad must have been a hit in 1956, as they spent their hard-earned money and advertising space on their $1.20 “Boneless Shad” menu, with sides and coffee as well.

I just love the simplicity of this ad.

Just look at these iconic establishments that are loved and still talked about 66 years later.

I love this trio of ads placed together in 1956.

Of all those amazing restaurants of yesterday, a few are still in operation today.

THE KNIFE AND FORK INN

The Knife and Fork Inn and Dock’s Oyster House are owned and operated by the Dougherty family.

The Smithville Inn is owned and operated by the Coppola family.

This next announcement is fabulous for Hertz Rent-A-Car.

In comparison, today, look at how many jurisdictions across the country with prosecutors let people who do this, and worse, go free without bail.

Much has changed in our criminal prosecution system in America over the past 66 years.

Here is the article on the front page:

This is one of my absolute favorite ads from this April 5, 1956 edition of the daily.

Finally, check out this “wanted ad” from Atlantic City Press, where they’re looking for their own ad rep.

You can easily see that it was a much more brutal society in 1956.

Here is the real “wanted ad”.

We asked Mike Heath to share his thoughts on finding such a neat piece of history.

I appreciate the opportunity to share my thoughts on where I found the diary and what it felt like to leaf through it. While demolishing an 80-year-old house in North Wildwood, I came across this log that was stuck inside the wall. As you know, he was in a very fragile state. As I carefully removed it from the wall, I saw the date April 1956… I love this type of story. My parents were teenagers at that time. Flipping through the pages, I was taken back to a time before we were born, a time of innocence in a way, where today’s moral degradation would not have been accepted or tolerated.

Heath continued: “I laughed at the property listings with houses in Ventnor, Margate and Longport that we are selling [for] less than 20 thousand dollars.”

“In addition, the cost of purchasing a vehicle was hundreds of dollars. I thought of you from the start knowing what the history of our area means to you and many of your listeners,” Heath said.