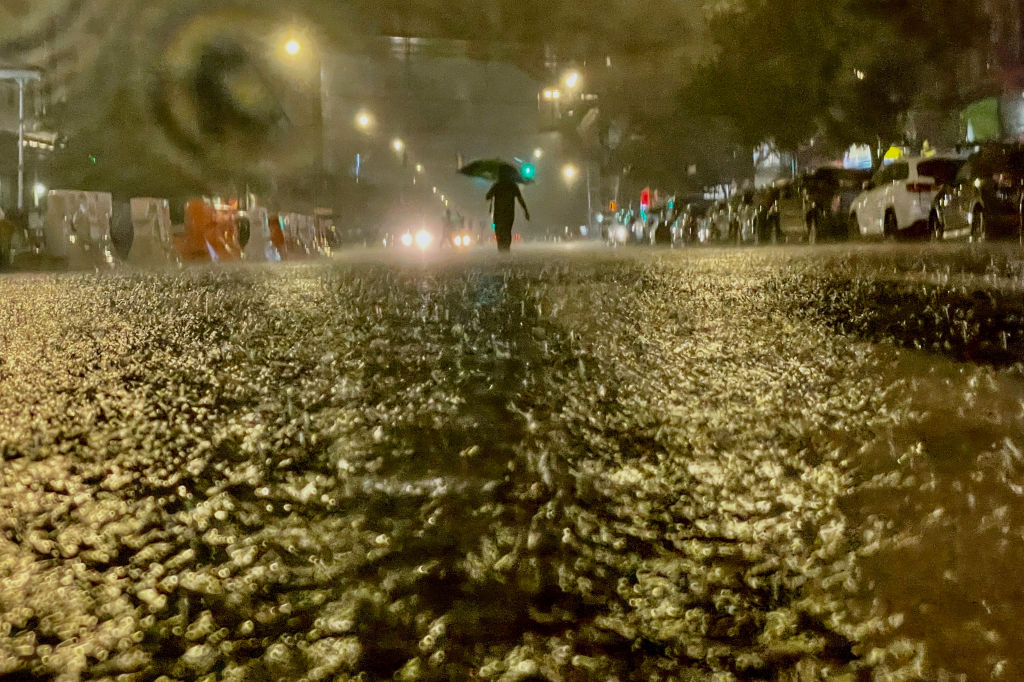 Ocean Drone, Saildrone, Captures Video Inside Category 4 Hurricane In Atlantic Ocean: What For?

The ocean-going drone, Saildrone, took video inside a Category 4 hurricane as it floated in the Atlantic Ocean.

(Photo: by David Dee Delgado / Getty Images)
NEW YORK, NY – SEPTEMBER 01: A person makes his way through the precipitation of the remnants of Hurricane Ida on September 1, 2021, in the Bronx neighborhood of New York City. The once-Category 4 hurricane swept through New York City, dumping 3.15 inches of rain over the course of an hour in Central Park.

The oceanic drone that looks like a futuristic surfboard was fitted with cameras and took unmanned footage.

The Saildrone was developed by the company of the same name in partnership with the National Oceanic and Atmospheric Administration or NOAA, according to CNN Business.

Saildrone is a Silicon Valley startup that has already sent five of its ships into extreme hurricanes in the Atlantic Ocean.

The 23-foot-long orange surfboard-like ship is fitted with a total of four cameras, which took the very first images inside the hurricane.

In addition, the oceanic drone has been designed to withstand and survive even intense weather disturbances, such as Hurricane Sam.

It should be noted that the hurricane the ocean drone filmed with winds over 120 mph or 190 km / h, as well as waves of 50 feet or 15 meters high, as seen in the video.

The video was able to capture the massive, high-speed wind blown waves of the storm.

According to Phys.org, the Saildrone displays impressive high-powered hurricane defense due to its “hurricane wing” which helps withstand the pressure of fast winds.

Ocean drones: what for?

That said, the indestructible ocean drone could help scientists study the inner workings of hurricanes through real-life images.

Saildrone’s website further claimed that its ocean drone could measure and record several hurricane data, such as direction, wind speed, temperature, humidity, salinity and even barometric pressure, among others. .

One of the NOAA scientists, Greg Foltz, said in a statement that one of the problems they observe using the ocean drone is “rapidly intensifying” winds from hurricanes.

Foltz further noted that such a sudden increase in wind force “poses a serious threat to coastal communities”.

For example, Hurricane Ida intensified from a Category 1 to Category 4 storm in less than a day, destroying nearby coastal communities.

The NOAA scientist hopes data from ocean drones will help them further study this phenomenon.

It should be noted that scientists have repeatedly warned the public that climate change will cause the ocean to warm. Thus, producing more and more intense and destructive hurricanes over time, which has been an urgent problem for people who live near the coasts.

That said, the Saildrone executive further emphasized that it is important to have a deep understanding of how the weather changes to propel solutions into the future.

Associated article: [Warning] NASA spots FIVE tropical cyclones in the Atlantic basin at once! Louisiana and Mississippi could be affected by Hurricane Sally!

This article is the property of Tech Times

2021 TECHTIMES.com All rights reserved. Do not reproduce without permission.