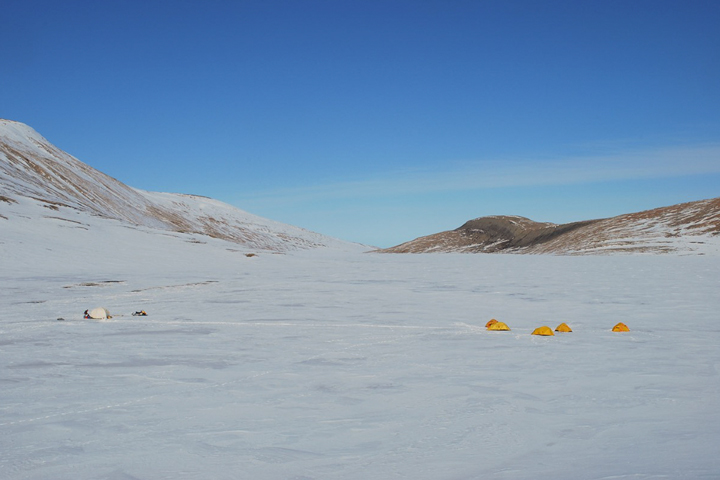 PNAS article: Atlantic sea surface temperatures, determinant for the climate, are the hottest for 3 millennia

South Sawtooth Lake on Ellsmere Island in Canada is deep, cold, and filled with answers for climate change scientists.

This lake at 80 degrees North has been collecting sediment for millennia, but it does not collect sediment all year round.

â€œMost years this lake is covered in ice for nine to ten months a year,â€ said Nick Balascio, geologist for William & Mary. “And not just a small layer of ice, but more than two meters of lake ice.”

Balascio has been named a “Rising Star” among Virginia faculty receiving the 2020 Outstanding Faculty Award, accolades announced annually by the State Council for Higher Education. He is part of a group of scientists who took advantage of a phenomenon related to the short summer of Ellsmere Island, which sees a strong and sudden pulse of sediment in the lake due to the snowmelt. By digging deep into the bottom, the researchers reveal columns of varves – layers of layered sediment.

Each varve represents a year of sedimentation dominated by a summer “sediment pulse”, Balascio said. And analysis of any of these preserved sediment layers can reveal information about past seasonal temperatures. In this study, the team correlated their recording of temperature variations at Sawtooth Lake with conditions in the North Atlantic Ocean.

Balascio and his colleagues have recorded nearly three millennia of sea surface temperatures, an important set of observations for people in the 21st century facing the effects of climate change. They presented their findings in an article “Annual variability in Atlantic sea surface temperature resolved over the past 2,900 yearsÂ»Recently published in the Proceedings of the National Academy of Sciences (PNAS).

“Any influence that we as humans have on the climate system is going to overlap with all the variations that exist naturally,” said Balascio, assistant professor in the geology department at William & Mary. “And these variations exist due to a variety of factors, one of which is the natural variability of ocean surface temperatures.”

The work summarized in the PNAS article follows a climatic phenomenon known as Atlantic Multidecadal Variability, or AMV. AMV, the paper explains, tracks long-term variability in North Atlantic Sea surface temperatures. Humans have been measuring sea temperature for about 160 years, a blink of an eye in geological terms.

But geologists figured out how to determine temperatures in the past by reading varves just as dendochronologists read tree rings. Years of cooler North Atlantic water result in a heavier snowpack in the South Sawtooth watershed, and when the summer melt arrives, more sediment enters the lake, sinks to the bottom and eventually forms the varve of that year.

â€œAnd in years when the temperatures are warmer, there is less snow accumulated to move material around the lake,â€ Balascio said. “So there is a link between these temperatures and the delivery of sediment to this basin.”

Importantly, AMV cycles are a major driver of climate in the northern hemisphere, particularly the Arctic, where the effects of global warming are among the most pronounced and dramatic. Balascio and his colleagues report in their article that sea surface temperatures are now at their highest for a long time – 2,900 years, in fact.

They report a long cooling trend starting around 900 AD and leading to the coolest period of the last three millennia, which occurred between 1400 and 1605. Temperatures began to rise at the end of the 16th century, an increase which has also seen an increase in AMV, that driver of the northern hemisphere climate.

Of course, anthropogenic warming has a cumulative effect and continues to contribute to the warming trend in sea surface temperatures in addition to natural variability – but by what extent? Balascio said that a better understanding of prehistoric AMV will help researchers unravel these questions.

â€œBeing able to understand the system – how these temperatures vary over longer periods of time – is important in defining natural climate variability,â€ he said. â€œAnd that’s important because these temperature changes have very felt impacts. They influence the climate of the Arctic as well as the Northern Hemisphere more broadly. “