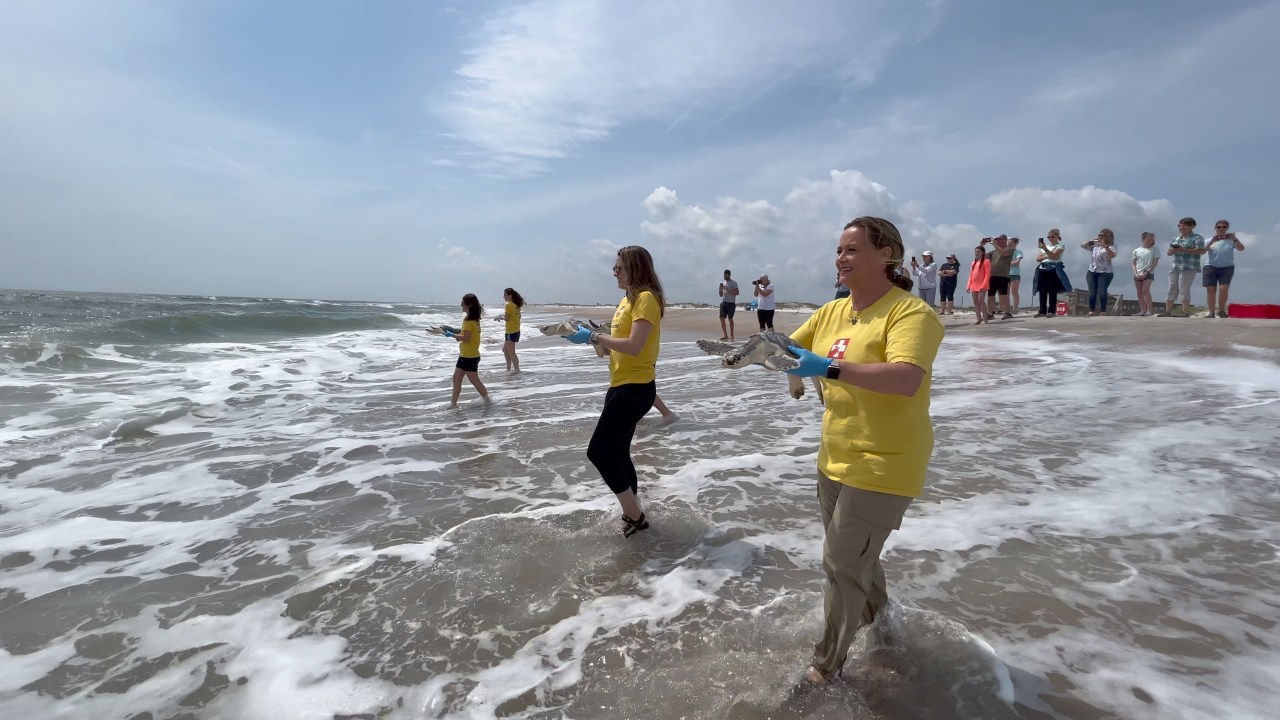 The Aquarium’s Sea Turtle Care Center crew transported the ten turtles to Little Talbot Island State Park near Jacksonville, Florida. in the early hours of the morning. The team said the warm Florida waters were the ideal release point for the animals, as the waters off the coast of South Carolina are too cold at this time of year.

Here’s more information about each turtle, provided by the Care Center:

Anna had a body temperature in the 60s Fahrenheit. The ideal temperature for a sea turtle is between 75 and 85 degrees F.

Kristoff also had a body temperature in the lower 60s in addition to some frozen areas on the beak and fins due to exposure to cold on the beach.

Sven and Hans had a low body temperature, but a normal heart rate on admission, so they were able to rest in a foam-padded bin before being moved to a reservoir to regain strength.

burnished also suffered from low body temperature but exhibited interesting fluttering behavior common to young sea turtles. They were given a pet-safe cube in their tank to encourage exploration and comfort in deeper waters.

Sodalite was snagged by a fisherman in the surf at Huntington Beach State Park, which the care team was able to remove without surgery. After the hook was removed, the team observed evidence that Sodalite had ingested marine debris and plastics in nature.

Gravel had a small circle hook stuck in their beak by a fisherman at the Myrtle Beach State Park fishing pier. The size and angle of the hook made it difficult to remove at first, but the Aquarium’s on-site vet, Dr. Lauren Michaels, was able to complete the removal without putting the turtle to sleep.

Aventurine was hooked by a fisherman at Seabrook Island. The big hook was stuck deep in the turtle’s throat, making it difficult to pull out. The hook was successfully removed and the turtle alternated between being on a ventilator and staff breathing manually for 24 hours.

Amethyst was caught on a hook at Shem Creek. The hook was removed the same evening.

Turquoise was hooked by a fisherman at Marine Corps Air Force Base Beaufort. The care center staff could not see the hook or fishing line, indicating that the small turtle likely swallowed the hook. This was confirmed when the veterinary team observed a very large fang with a wide mouth near the turtle’s stomach.

Tuesday’s outing was the first of the season and also the most turtles the Care Center has released at one time.